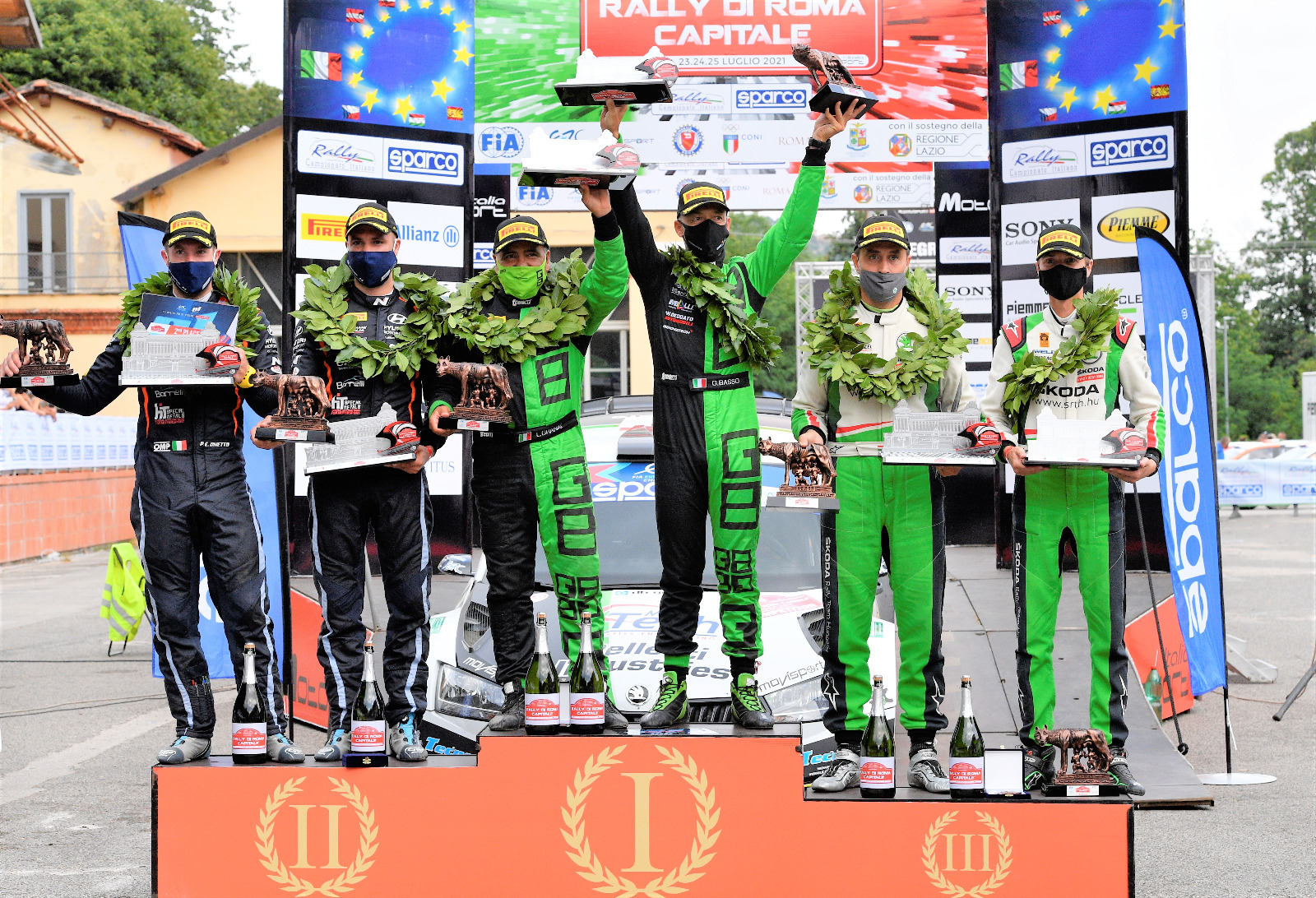 25.07.2021 - Giandomenico Basso and Lorenzo Granai, Skoda Fabia Evo run by Movisport, won the Rally di Roma Capitale, the event valid as the third round of the FIA European Rally Championship and fifth of the Sparco Italian Rally Championship. The Italian driver secured the second win of this rally after the one claimed in 2019 showing again his value on a European stage.

The challenge for the win has been really spectacular and it involved Basso and Andrea Crugnola, with Pietro Ometto, in the Hyundai i20 of Hyundai Rally Team Italia. The reigning Italian Champion got off very resolute winning the opening spectacle stage at Terme di Caracalla, which is the new event of this edition and then continued for the whole day one closing on top. In the second stage on Sunday, SS8, Crugnola suffered a puncture that cost him 25s and the classification lead. Stubborn and resolute, Crugnola did not give up and was second at the flag with a 35.8s gap to the top.

Behind the top two, the great Norbert Herczig and co-driver Ramon Ferencz (Skoda Fabia Evo/Skoda Rally Team Hungaria) rounded off the podium at 40.4s. The Hungarian driver came to the fore in an extraordinary closing test when he managed to claim the best time and get past Efren Llarena and Sara Fernandez, in the Skoda Fabia Evo (Rallye Team Spain). The latter pairing was the protagonist of day two when it won the first loop of the "Santopadre-Arpino", that was the longest test of edition 2021. The Spanish crew ended fourth. The challenge for P5 has been very exciting and the Pole Miko Marczyk and co-driver Szymon Gospodarczyk, Skoda Fabia Evo (Orlen Team), led Fabio Andolfi and Stefano Savoia’s Skoda Fabia run by M33. The Italian driver was ninth early on, but did very well in the Sunday tests and climbed four places up and claimed the third place of the Sparco Italian Rally Championship’s classification.

The top ten was rounded off by Simone Tempestini and Sergio Itu (Skoda Fabia Evo), Andreas Mikkelsen and Ola Floene (Skoda Fabia Evo/Toksport WRT) that were never really on the pace, MRF Tyres’ Craig Breen and Paul Nagle in the Hyundai i20, while the tenth place went to the Czech Republic’s driver Erik Cais and Jindriska Zakova in the Ford Fiesta MkII, that put in a great closing test.

Alexey Lukyanuk and Alexey Arnautov (Citroen C3/Sainteloc Junior Team) had to retire from SS9 due to an exit that did not have physical consequences for the crew. "The Russian Rocket" was third at the moment of the incident and therefore wasted the chance to get important points for the European Championship that is their main target. Damiano De Tommaso and Giorgia Ascalone (Citroen C3/Meteco Corse) run a strong rally up to SS10 and closed Saturday in fourth place. They could have fought for the podium but a puncture on Sunday morning made them slip out of the top ten.

This edition has made special by the sporting event that produced a lot of spectacle confirming the high technical level of the Rally di Roma Capitale. The itinerary has made the strongest drivers struggle and the show on Friday, July 23rd has been great. The rally kicked off from Castel Sant'Angelo, went through the city center of Rome at Colosseo, Fori Imperiali and Vittoriano before the exclusive spectacle stage "Terme di Caracalla ACI Roma". Confirmed only a few weeks before the event, the Caracalla test has been the most followed moment, a lot of people defined it memorable and awarded the Pasquale Amoroso Trophy to Andrea Crugnola, who posted the fastest time.

The Rally di Roma Capitale Cup, that is the event that saw the world debut of the Toyota single-make event dedicated to the new GR Yaris Rally Cup produced particularly exciting battles like the one that saw Alessandro Ciardi and Alessandro Tondini, challenge Federico Romagnoli and Monica Rubinelli, and the Finn Markus Manninen and Teemu Sillanpaa that posted the fastest scratch on the longest stage, the "Santopadre-Arpino".

"It is really difficult to summarize the whole lot of emotions we lived during this weekend – Max Rendina commented. I believe we can proudly say we organized a spectacular and unique event. Setting up a test at the Terme di Caracalla is a landmark of the Rally di Roma Capitale and of the City of Rome. We had very important media attention with wide coverage on national and local TVs, newspapers, web and socials that did not focus only on the sporting element, but also on the initiatives connected to this event. The logistic and technical efforts that we put in have been very important and my staff worked around the clock for weeks. I will personally thank each one of them as they are a lot and this would have not been possible without them. I cannot forget all the institutions, ACI Sport, ACI Roma, the Municipality of Roma Capitale, Regione Lazio, and all the municipalities involved. A special thanks goes to Fiuggi that housed us again, and then all Stewards and staff. Devising a liasion of over 730 km requires the involvement of a lot of local realities, good care and sensitivity. Finally, I would like to thank all our partners, our backers that allow us to grow year after year. My compliments go to the winners. I wish everyone a sincere goodbye to the 10th anniversary edition that will require hold some further surprises".