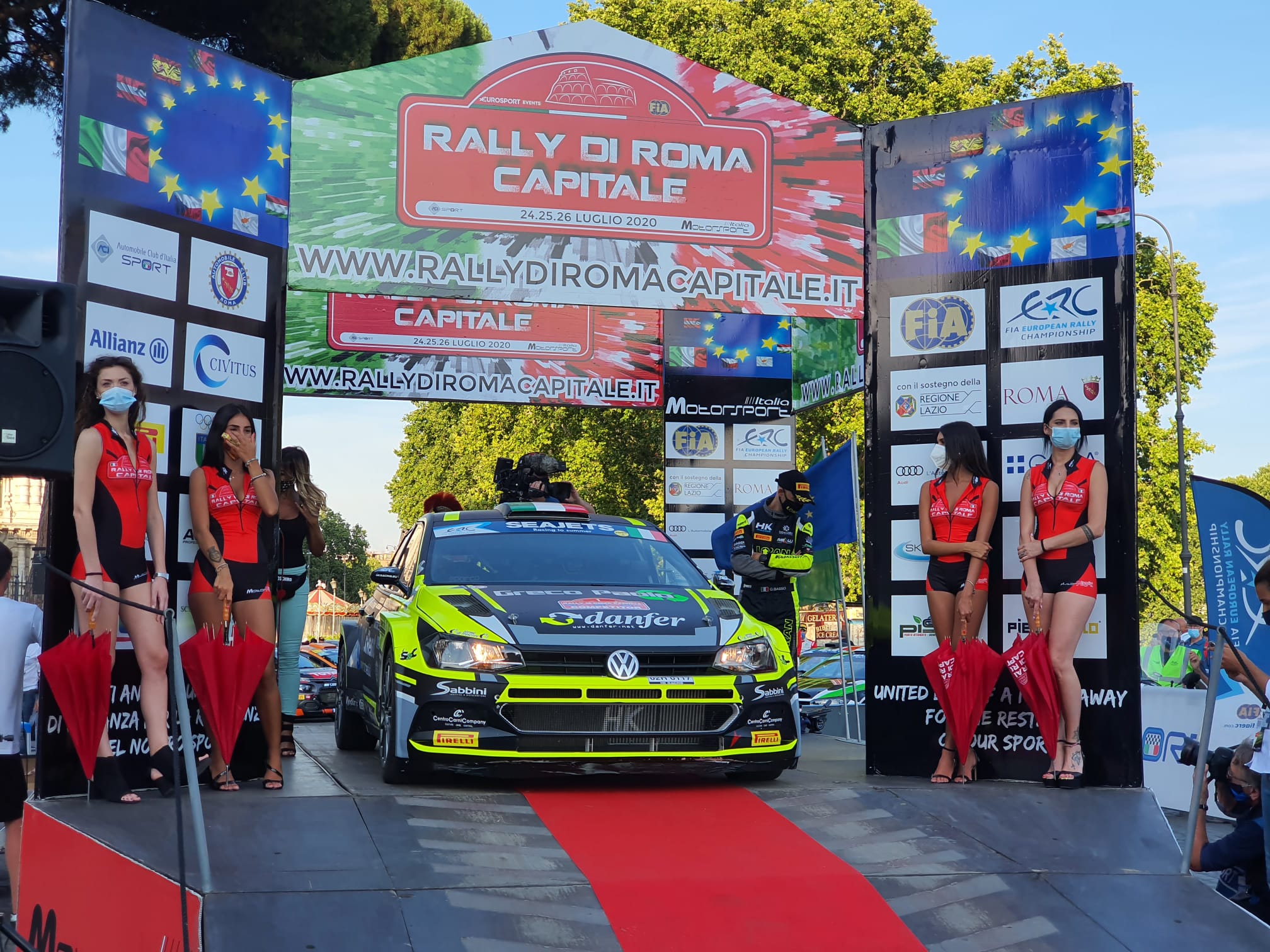 24.07.2020 - Rally di Roma Capitale got underway. The event organized by Motorsport Italia has finally kicked off the FIA European Rally Championship 2020 and the Italian Rally 2020 Championship in an exciting evening in Castel Sant’Angelo and Rome’s city centre.

After four months of stop, engines switched on in the most spectacular location of the whole championship. Credit goes to the staff led by Max Rendina that managed to put on this spectacular #startoftherestart event, this hashtag that has become a brand, a common denominator for all the fans and staff.

Before the start, Motorsport Italia awarded three "Start of Restart" recognitions to the three sporting and promotional institutions that made this event possible. These were given to Jerome Roussel, Category Manager - Regional Rally of FIA, Jean-Baptiste Ley, FIA ERC coordinator, and Marco Ferrari, Director of Motorsport Direction of Automobile Club d'Italia.

Shortly after this institutional moment, motorsport has been the protagonist with the start of the Rally Stars Roma Capitale, the event open to WRC+ cars that was followed by the eighth Rally di Roma Capitale, with all the strongest drivers of the European and Italian Championships. After the charming setting of Castel Sant’Angelo, cars went through Rome’s city centre escorted by the Municipal Police in an exciting show.

"It is incredible to start from here and driving a racing car close to the most beautiful and famous monuments of Rome. Really great”. This was the comment of Oliver Solberg just before getting in the car. The Swedish driver is one of the most credited to the final win in an edition that announces to be quite tight and difficult to predict as 40 R5 cars are at the start. The best time in the Qualifying Stage was posted by 2019 winner Giandomenico Basso, who pipped 2018 winner Alexey Lukyanuk. The two decided to be respectively second and third on the road tomorrow. Solberg will open the way and will try to build some experience on tarmac. The fourth at the start is Andrea Crugnola, who is also going to aim at the win and will be followed by Emil Lindholm. It is going to be interesting to compare the performance of FIA ERC drivers with that of the drivers entered in the Italian Championship like Umberto Scandola and Rudy Michelini, just to name two.

The starting order has been published on www.rallydiromacapitale.it
Day one will include three stages tomorrow to be repeated two times: "Pico Greci - Gruppo L'Automobile", "Roccasecca-Colle San Magno" and "Santopadre-Arpino".
Since the rally will be run behind closed doors, a big media coverage including web streams and TV connections will follow the rally on Saturday and Sunday. The Facebook page of CIR (@CIRally) will cover the rally live from 9:10, while Eurosport will start with SS2 "Roccasecca-Colle San Magno" at 10:02 @fiaerc.