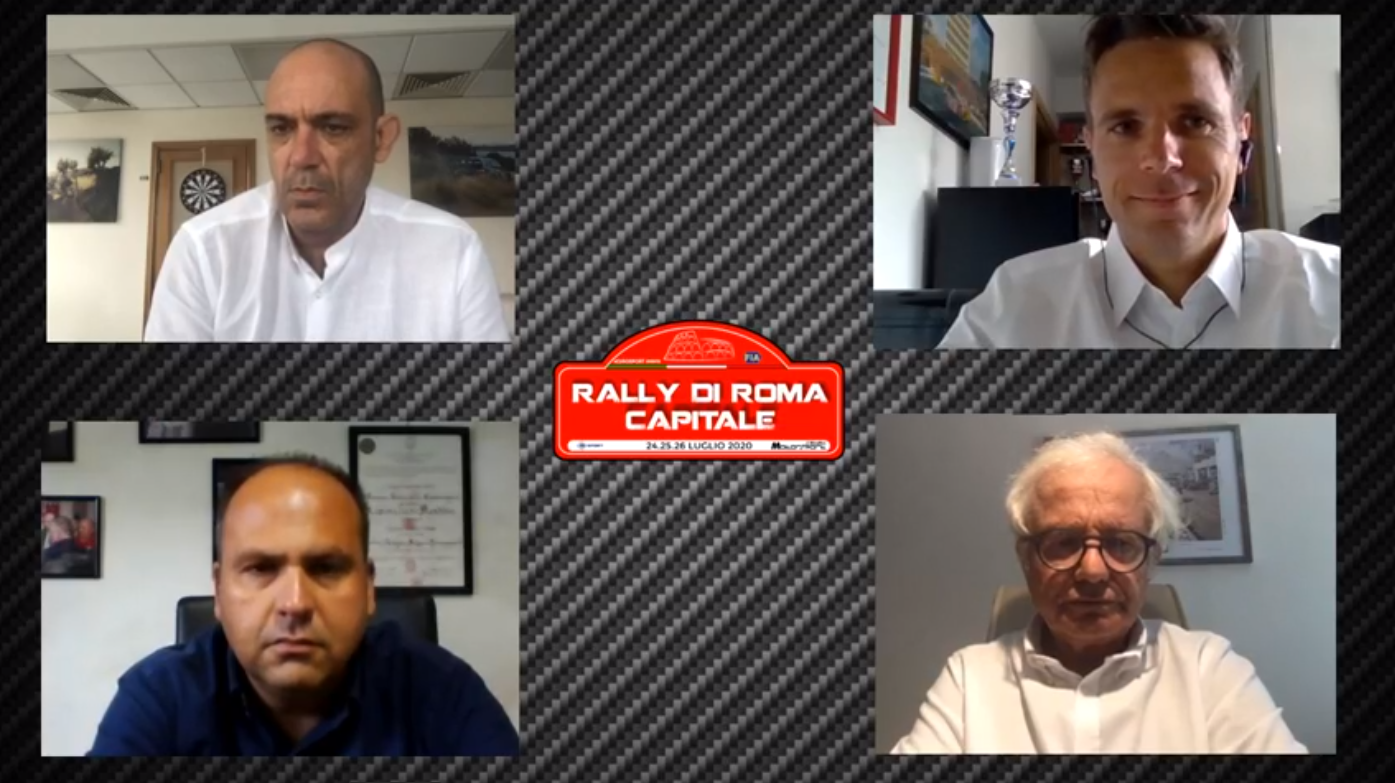 15.07.2020 – The live streaming of the press conference to introduce edition 2020 of the Rally di Roma Capitale took place this morning from the official Facebook page facebook.com/rallydiromacapitale in agreement with the Covid-19 regulations.

The details of the program and itinerary of the Rally di Roma Capitale and the Rally Stars Roma Capitale -- the event dedicated to WRC+ that will open the way on the same itinerary -- have been unveiled during the conference.

The entry list will be published shortly and includes a remarkable number of R5 cars (42) and Rally4 (32), with the best drivers of Europe. This is going to be the first FIA rally after the stop given on March 13th at the end of the Rally Mexico.

Compliments to Motorsport Italia arrived unanimously from national and international motorsport for the important organization efforts put in with the Motorsport-pass platform to regulate the access of all staff in the due respect of the Covid-19 regulations in Italy. The present situation forced the organizers to modify the itinerary and to cancel the stages in Ostia Lido, but the great work of staff has been rewarded by the big numbers scored so far regardless.

The rally, as announced in the press conference, will be run behind closed doors, which means that only staff will be allowed to access regrouping, service park, media zone, race direction, start and finish areas. No fans zone have been devised along the stages. Fans will have the chance to follow the event thanks to the many streaming events set up by Eurosport Events and ACI Sport and the TV specials aired by Eurosport and RAI Sport.

Marco Ferrari - Director of Motorsport Direction of Automobile Club d’Italia
“I bring to all of you the wishes from the President of the ACI Sport Rally Commission Daniele Settimo, who could not be present due to work commitments. The Rally di Roma Capitale is a landmark for a lot of of other international events and this makes us proud because the hard work and collaboration of Motorsport Italia, Max and all his staff made it possible this restart with the implementation of a very detailed sanitary protocol. I would also like to thank the Rome Municipality, the Municipalities housing the Rally, the Municipalized companies and the Regione Lazio that put their trust in Motorsport Italia to make this rally possible.”

Marco Rogano - ACI Sport S.p.a. General Director
“This is going to be another memorable rally as in the past years, maybe even more so as the difficulties to overcome have been a lot. Motorsport Italia does not stop in front of anything. Next to FIA ERC and CIR, the Rally di Roma Capitale will also open the Italian Rally Junior Championship with a lot of young drivers trying to get the title to access the World Rally Championship 2021. I hope that the Decree Laws regarding social distances and all its regulations will be duly observed, and I remind everyone that media coverage is going to be important and will give the chance to follow the race from home”.

Nicola Zingaretti – President of Regione Lazio:
“The Italian Rally starts from Rome on July 24-26. I would like to thank FIA President Jean Todt, ACI and all the people involved in the organization of this extraordinary sporting event. The fact that such a popular discipline has in the Capital a much-awaited event is an important message. Housing again important sporting events is a precious chance for a restart for Rome and Lazio. This will be a chance to have fun for a lot of people and for a vast number of spectators on TV in the due respect of the present regulations. This is going to help us gaining another piece of that life that has been turned upside down in recent months”.

Max Rendina:
“For us the race is behind closed doors, meaning that no spectators will be allowed in the service park, regrouping, park ferme, start and finish areas as the access to these will be limited and will follow the triage and entries will be regulated by the check of special passes. We did not devise public areas along the stages, but we cannot stop fans from going to the stages, even though we would recommend not to do so. Should some undisciplined fans decide to go there, they will need to wear face masks and respect the prescribed social distances. TV coverage will be important, therefore there will be plenty of chances to follow the race. We need collaboration from everyone to deliver a great spectacle despite these strange times”.