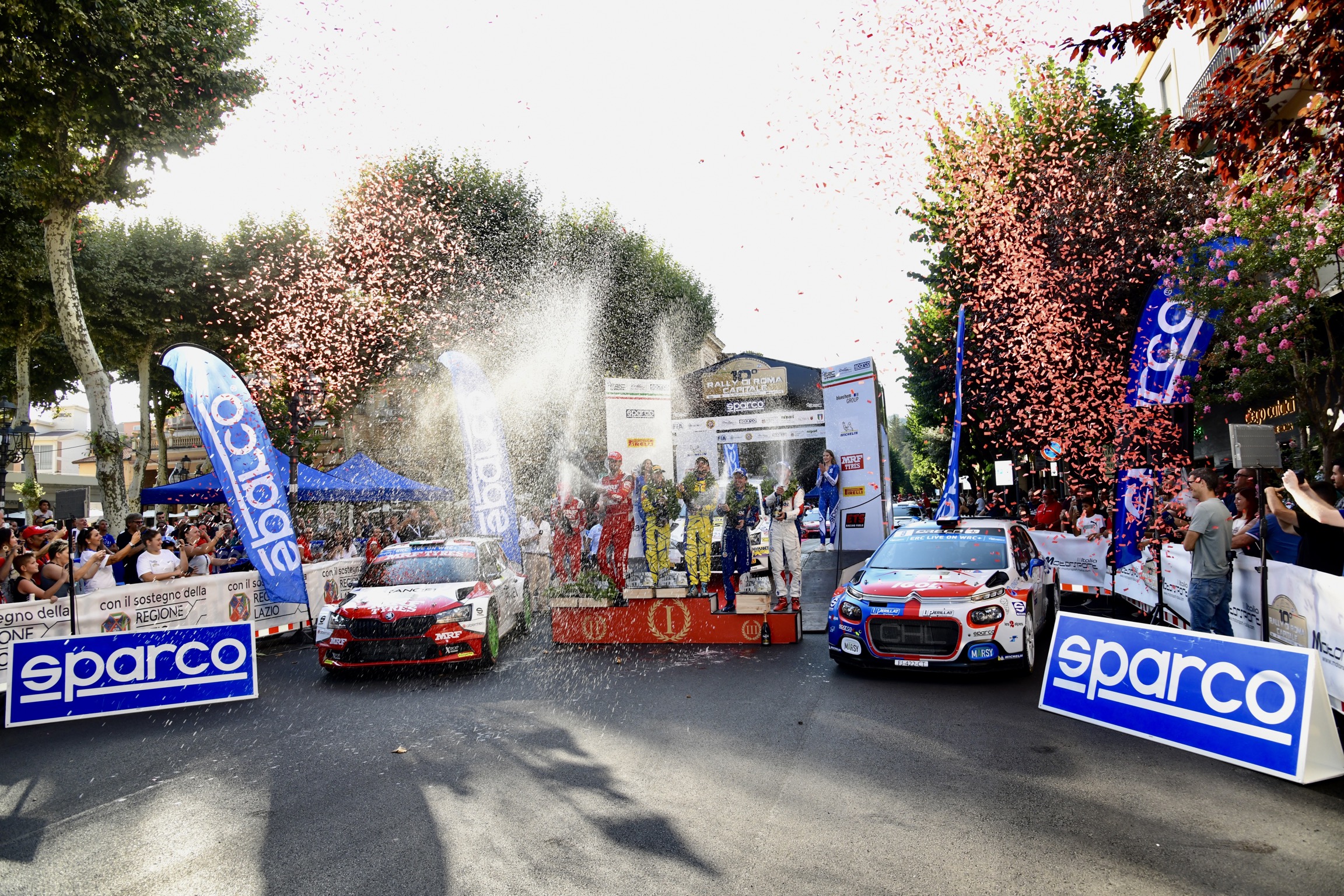 The second place went to Simone Campedelli, the third to Yoann Bonato. Llarena puts his hands on the European title. Crugnola run a strong rally but was slowed down by an issue with the accelerator.

The driver from Varese, 26 years of age, claimed a historic win, the first for him on the European scene, at the end of a very solid performance. De Tommaso took the lead after SSS1 “Colosseo ACI Roma”, the super spectacle stage devised in the area of Colle Oppio in front of the most famous Roman amphitheatre in the world that kicked off the challenge on Friday with an exciting background. Thanks to this first win, De Tommaso also secured the special Trophy dedicated to Pasquale Amoroso, the Manager of ACI’s Direction for Motorsport, who passed away a few years ago.

From that moment on the challenge involved De Tommaso and the leader of the Sparco Italian Rally Championship Andrea Crugnola with Pietro Elia Ometto in the Citroen C3 Rally2. Crugnola got the lead using his experience at the end of day one and built a good advantage, but a problem with the accelerator on Sunday morning forced him to recover more than a minute. The Citroen driver ended fifth and was disappointed by thinking about what could have been, as De Tommaso, who is his direct rival in the Sparco CIA, narrowed down the gap in the standings to only 9 points.

Simone Campedelli and Tania Canton (Skoda Fabia Rally2 Evo) claimed a deserved second place and earned a round of applause for their best result of the season in the European Championship. Campedelli did not make big mistakes and increased his pace from stage to stage posting interesting times also in the “Rocca di Cave-Subiaco”, which is the longest test of the rally and of both championships.

The great Yoann Bonato and Benjamin Boulloud secured a good podium at the photo finish in their Citroen C3 Rally2. The French driver impressed for his speed in the closing part of the rally and he managed to overtake Llarena, who had been in P3 until then, in the Super Power Stage.

The Spanish driver with Sara Fernandez at the notes in the Skoda Fabia Rally2 Evo have reasons to smile. After reaching Rome on top of the standings, Llarena run a solid rally and ended fourth by a whisker. This result, due also to the sixth place of Simone Tempestini-Sergiu Itu (Skoda Fabia Rally2 Evo), that are the closest rivals in FIA ERC, allowed Llarena to build a good advantage in the classification before the remaining two rounds of the championship.

The Rally di Roma Capitale has been very tough for a lot of drivers. Giandomenico Basso and Lorenzo Granai (Hyundai i20 N Rally2), that won here last year, had a tough weekend this time around. They were slowed down by three jump starts at the beginning and then went off due to an excursion that damaged the safety devices of their car. Fabio Andolfi-Manuel Fenoli (Skoda Fabia Rally2 Evo) did not finish either as they damaged the engine of the car going off in the same place as Basso. Alberto Battistolli-Danilo Fappani (Skoda Fabia Rally2 Evo) also went off and, after being close to the top ten, they stopped in the final transfer to Fiuggi due to some issues to the fuel pump.

The Rally di Roma Capitale edition 2022 is going to be remembered for the prologue on Friday, July 22, which brought the drivers to the usual start in Castel Sant’Angelo and then to the Colosseum. This required an unprecedented organisational effort for Motorsport Italia’s staff, but it ended up in an unprecedented show that is destined to remain in the history of this discipline.

“This has been a fantastic tenth anniversary - Max Rendina, the ideator of the event commented - we put together an unrepeatable edition. I wish to thank the Office Big Events of Roma Capitale, which backed us for the Colosseum super special stage, Regione Lazio, Automobile Club d’Italia and ACI Roma which have always supported us, the Municipality of Fiuggi, that hosted the paddock, all the 47 municipalities involved and our partners. My congratulations go to the winners Damiano De Tommaso and Virginia Lenzi, an Italian crew that has led also the drivers of the European Championship. See you all next year”.

The special price dedicated to the friend Augusto Partuini, who was a much-appreciated Race Director who passed away last June, went to the winner of the final Power Stage, the Czech Filip Mares in the Skoda Fabia Rally2 Evo.

Andrea Mabellini and Virginia Lenzi (Renault Clio) won the 2WD Italian Championship thanks to the overall P23. They also won the Promotion 2WD Championship too.

In the Italian Rally Junior Championship, the series where Automobile Club d’Italia aims to make the youngest promises of Italian rally grow, the best performance was put in by Alessandro Casella and Rosario Siragusano, who led Davide Nicelli-Tiziano Pieri and Edoardo De Antoni with Martina Musiari, all in the Renault Clio Rally5 managed by Motorsport Italia.

Gianni Turri and Davide Bragaglia (Renault Clio), won the race Trophy, where they produced a lot of spectacle in the GR Yaris of the GR Yaris Rally Cup. The victory went to Paperini-Fruini, who led Manninen-Sillanpaa and Ciardi-Cecchi.