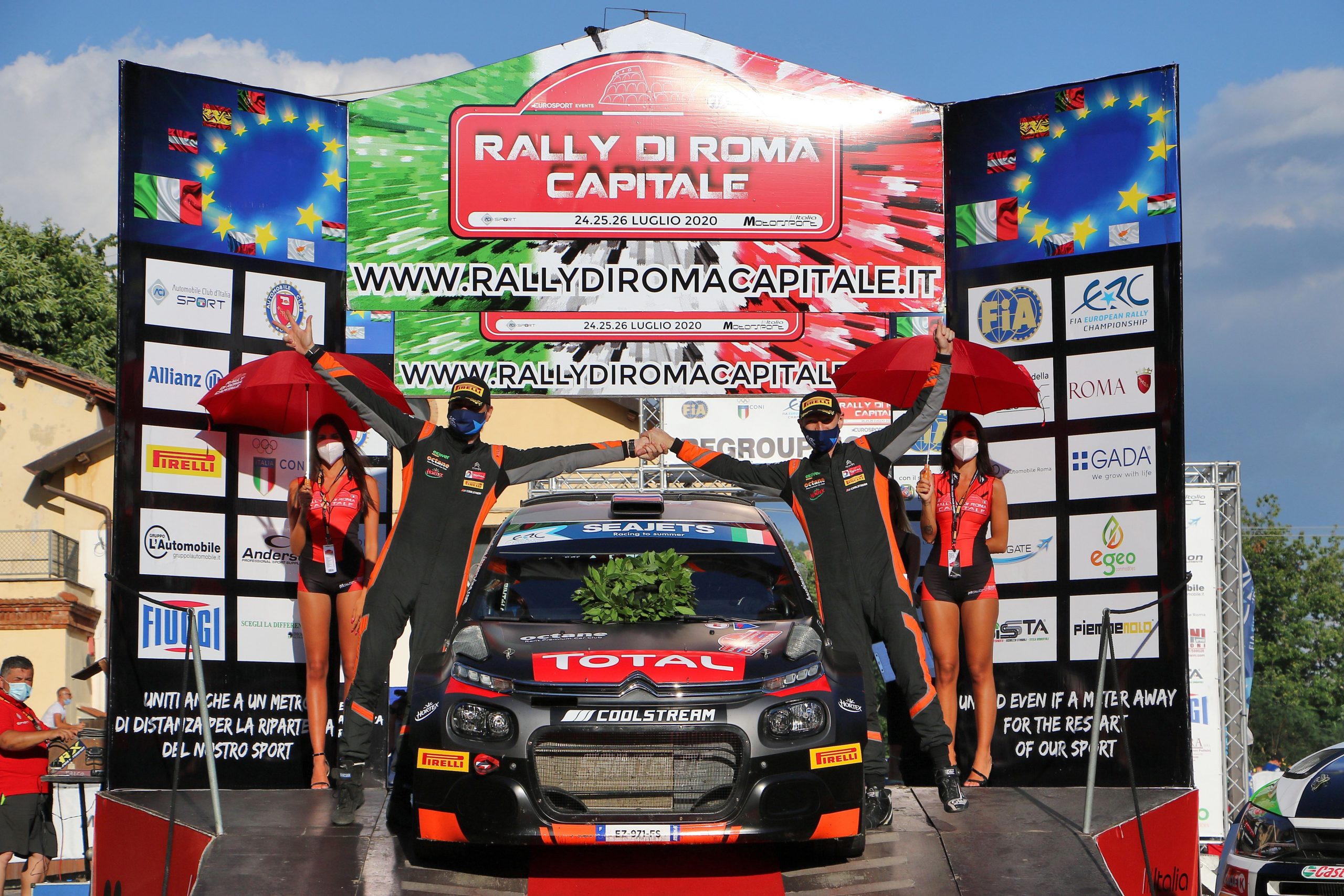 26.07.2020 - The Rally di Roma Capitale 2020, valid for the FIA European Rally Championship 2020 and Italian Rally 2020 Championship has been a solo race. The event organized by Motorsport Italia has kicked off competitions after the stop that continued from the Rally Mexico producing a lot of spectacle but the victory has never questioned as Alexey Lukyanuk and Dmitry Eremeev (RUS) led their Citroen C3 R5 of Sainteloc Junior Team to the top step of the podium.

"It was really an incredible way to start the season, I have to thank the organizers for organizing this rally at such a difficult time. It was a pleasure for us to be present, the rivals were of absolute value and today was a very demanding day. I would like to thank the whole team and Dmitry for their excellent work," Lukyanuk commented at the finish line.

Behind them, Giandomenico Basso and Lorenzo Granai (ITA) put in a bold performance at the debut in the Volkswagen Polo GTI R5 of Team Loran. Basso had already won Rally di Roma last year and is the Italian reigning champion and he defended very well his title. Basso started carefully in day one to save tyres for the Sunday tests. The driver from Treviso raised his pace in day two and ended 16.1s shy of the winners. Basso claimed the top step of the podium in the first race of the Italian Rally Championship, coming second in the second one.

“We are really happy about the work we completed – Basso commented. - Yesterday we left Lukyanuk “have some fun” because after Crugnola’s retirement we decided to think about the classification. Today we tried to keep the pace of Andrea but he was very fast. This has been a good opening of the season on the new car with HK and Loran though”.

The very young Oliver Solberg (SWE) and co-driver Aaron Johnston (IRL) claimed a great third place in the Volkswagen Polo GTI R5. The young son of 2003 World Rally Champion Petter came to Italy to run his first rally on the tarmac and put in very interesting times. He closed his effort in P3 at +1’03.2s, but displayed great skills and preparation that envisage for a brilliant career.

“It has been amazing – he happily commented, - I have to congratulate Basso and Lukyanuk that were really quick but my first participation at the Rally di Roma Capitale has been a fantastic experience. I would like to thank PA Racing and Pirelli: this has been a great weekend and I hope to have the chance to be here again”.

Craig Breen and Paul Nagle (IRL) ended fourth in the Hyundai i20 R5 run by Team MRF Tyres. They have been at ease in the narrow tests of day one that reminded them of the twisty Irish roads. Breen proceeded Simone Tempestini and Sergio Itu (Skoda Fabia R5) by just 1.3s at the end of a challenge that lasted the entire rally.

The double race of the Italian Rally Championship has been nice and spectacular too. Basso did not have rivals on Saturday and led Rudy Michelini and Michele Perna (Volkswagen Polo GTI R5) and Antonio Rusce with co-driver Sauro Farnocchia (Citroen C3 R5).

The second race took place on the same stages on Sunday as Andrea Crugnola and Pietro Elia Ometto bounced back in their Citroen C3 R5 of F.P.F. Sport. The Italian driver tried to push hard to shine in the fight for the victory of the European Championship round, but an off in the first test ended his rally early. Restarted in the second leg, he won six stages and the second race of CIR with them. This proves that had things gone differently, he could have achieved more. He also won the second Memorial Pasquale Amoroso as he posted the best time in the closing stage, SS15 “Guarcino - SKY Gate/2”.
Behind Crugnola and Basso, the third place went to Umberto Scandola and Guido d’Amore (ITA) in the Hyundai i20 R5 of Hyundai Rally Team Italia.

The rally run behind closed doors met the interest of the International scene due to the important and well structured Covid-19 protocol that characterized it. Motorsport Italia worked for months and implemented a web platform to register and track all the staff, devised a triage area thanks to the collaboration with Pissta to monitor access of staff at service park, regrouping, media zone and race direction.

“We put in a huge effort – the mind behind the Rally di Roma Capitale Max Rendina commented, - but thanks to the collaboration with FIA, Eurosport Events, ACI Sport, National Institutions and all the local administrations that supported us, we managed to resume rallying. We really hope this could be an example and that #startoftherestart, as the Rally di Roma Capitale 2020 has been defined, could deliver a positive message to the whole world of motorsport: together we can do it, we can restart and go back to live our passion as we used to do before the lockdown. I would like to thank my whole staff, they have been great as always”.