The Rally di Roma Capitale 2021 has been unveiled: a new record of participants and R5 cars 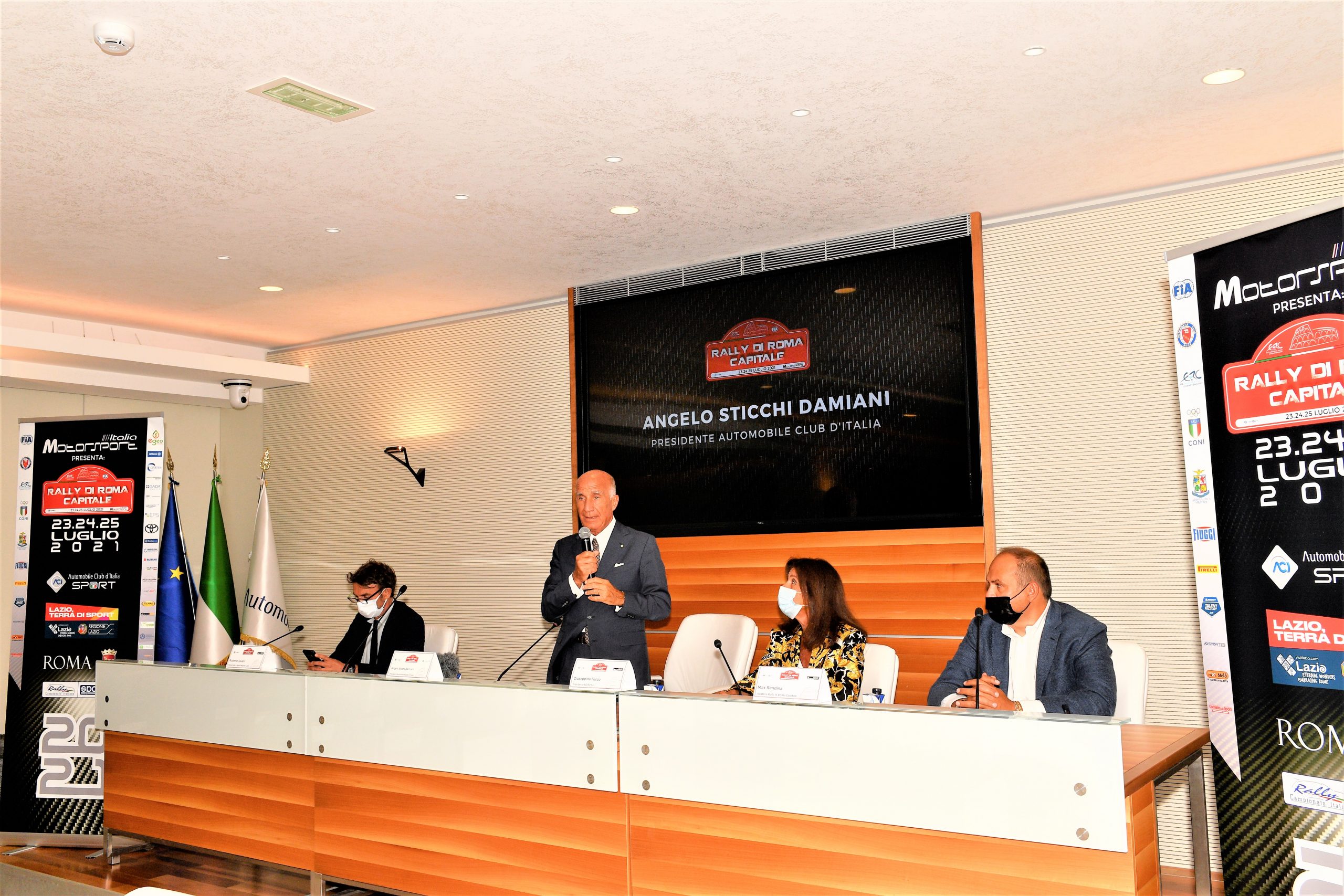 14.07.2021 – The press conference to introduce the Rally di Roma Capitale 2021 has taken place this morning in Rome’s Sala Giuseppe Spizzuoco at the headquarters of the Automobile Club d'Italia. The event organized by Max Rendina’s Motorsport Italia reached its 9th edition that will take place next July 22nd - 25th and will be valid as the third round of the FIA European Rally Championship and fifth of the Sparco Italian Rally Championship.

The ninth edition of the Rally di Roma Capitale is much awaited and will feature interesting and important novelties compared to the previous editions. Despite the rally being run behind closed doors according to the current regulations, the rally will kick off on Friday evening at local 19:00 from the spectacular Castel Sant'Angelo and will propose again the unmissable appointment with the parade in the Rome city centre. The cars will go past the Colosseo, Fori Imperiale, Vittoriano heading to the Circo Massimo where the first test will take place at 20:00. This is an absolute novelty of 2021: a road test around the Terme di Caracalla.

The racing action will move around Fiuggi, which will also host Service Park and Rally HQ, on Saturday and Sunday and the stages will involve the municipalities of Cave, Fumone, Arsoli, Arpino, Santopadre, Rocca Santo Stefano, Cervara di Roma, Collepardo, Ceprano, Capranica Prenestina, Bellegra, Rocca di Cave, Trevi nel Lazio and Guarcino in an itinerary combining tradition and innovation that is globally recognized as one of the most difficult and technical rallies in the whole European calendar. The finish line will be in Fiuggi on the afternoon of Sunday, July 25th.

Great care will be devoted to the green aspects of the competition as the rally has been awarded the two stars of the FIA Environmental Accreditation Program. Among the initiatives connected to this important aspect, Motorsport Italia will only use hybrid or electric vehicles, set up waste collection points in Fiuggi and in all the stages and devised a short liaison to cut carbon emissions. These shared efforts will involve a lot of small but crucial gestures to raise the sensibility towards the very important aspect of environmental protection.

As usual, media attention is a central aspect of the Rally di Roma Capitale 2021. The event will be followed by Eurosport and ACI Sport, which are the promoters of the FIA ERC and Sparco Italian Rally Championship, which will grant global coverage on TV, web and social media. A lot of national and local networks and magazines will also cover the event bringing all the action to the fans. The social network pages of the event will provide great coverage of the event. Thanks to the big efforts put in by Motorsport Italia and MS Media Group a new series "Rally di Roma Capitale racconta..." has been describing the itinerary and the hosting territory since last Thursday, July 8th. The third episode will be aired tonight, Wednesday, July 14th at 22:00 on MS Motor TV (CH 229 SKY). The series will reach its conclusion on Sunday, July 18th at 20:00 with the fourth episode.

Angelo Sticchi Damiani (President of Automobile Club d'Italia):
"We can envisage a great success. The commitment of Max Rendina and his staff, their passion and competence are recognized by everyone. Being located in a splendid and unique city like Rome is an advantage and the Caracalla test is the icing on the cake. It has been a huge job also in terms of getting all the permissions, but this will contribute to the success of the Rally di Roma Capitale. We all are seeking normality and this event wants to be a restart. We are all changed by what happened and what is still happening and we are here to support the organizers and do all that is possible to give value to our amazing history in the world of rally".

Giuseppina Fusco (President of Automobile Club Roma):
"The great sensibility and preparation behind the Rally di Roma Capitale is the key to the success obtained by this benchmarking event on the national and international scene in the past nine years. Automobile Club Roma has always been close to Max Rendina and his team to support and promote this event as next to the sporting event it also proposes other important themes like safety and road education, environment protection and the promotion of virtuous behaviours to the benefit of housing territories. I wish the best of luck to the ninth edition of the Rally di Roma Capitale".

Roberto Tavani (Advisor Politiche dello Sport Regione Lazio):
"I am really happy for being here this morning and I bring the salute of the President Zingaretti and the Regional Council. The Rally di Roma Capitale is part of the sporting programmation of Regione Lazio for 2021 which will concretely support this event that showcases some of our beauties. About 40 entities and municipalities are involved in this project and this gives an idea of how wide the connections of this event with the territory are. I remember the first start from Castel Sant'Angelo, the tension of the moment, the participation, the great celebration of the sport that this event has always been. This is the sort of power that should boost our desire to restart. Many events that go beyond sports are back in our city and region, which allows us to combine three elements that our everyday life should be based on: health, socialization and economy”.

Max Rendina (Head of Rally di Roma Capitale):
"Thank you all. I have to thank all my collaborators, starting from Simone Ferraro, Bruno De Pianto, Emanuele Inglesi, my secretary and all the team that never gives up. I can guarantee that the job done is huge, we reached a record of entered R5 cars in the European 2021 Championship and this boosts our confidence and determination. I would like to thank ACI for being next to us to overcome all the obstacles, Automobile Club Roma, Regione Lazio, the Municipality of Roma Capitale, the Local Police Forces of Roma Capitale and all the Entities and Administrations involved in the event. We are proud of the Rally di Roma Capitale, we decided to add the great spectacle at the Terme di Caracalla and I hope that next year, on the occasion of the 10th edition, we could completely open the show to the public".